We recently sat down with our new Deputy Director Baron Reed to discuss his professional journey at Northwestern, how he initially got involved with Northwestern Buffett and the importance of interdisciplinary academic work:

Tell me about your journey at Northwestern. How did you first get involved with Northwestern Buffett? 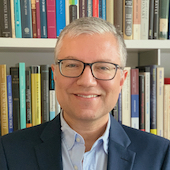 I've been at Northwestern for about 15 years now in the Department of Philosophy. In the early years, as is often the case with junior faculty, I didn't really know many people outside of my own relatively small circle in the department. After getting involved in the Faculty Senate a few years ago, I was very much struck by what seems like a paradox: on one hand, faculty can be each other’s greatest resources and, on the other hand, they don't know each other very well. It seemed to me there was this enormous resource that wasn't being used as well as it could be.

At the same time, I was also fascinated by the way in which interdisciplinary conversations proved to be among the most useful that people can have. When you hit a certain stage in your career, you understand the methodology of your discipline very well but don't always see how those same issues could appear to someone who has been trained in another discipline. A good interdisciplinary conversation will often be one that shows you the reverse side of an issue and, in many cases, will spark some bit of creativity that hadn’t really been previously accessible.

I wanted to do what I could to foster these conversations to a greater extent at the university, and I eventually connected with Northwestern Buffett’s Executive Director Annelise Riles, who shares a very strong commitment to the same goal.  She invited me to join Buffett to do what I can to help build that sort of community. This has been the next step in a long path of trying to foster those kinds of broad, creative interdisciplinary conversations.

What initially sparked your interest in interdisciplinary work?

I think much of it is just intellectual curiosity. I love hearing about what other people are working on. I love seeing the way in which different research projects can often take on the shape of puzzle pieces in a broader picture. For me, there's a lot of joy in connecting people who didn't realize how well their work could fit together. That's been one of the things that has drawn me to Northwestern Buffett. It’s a space where ambitious endeavors are rewarded. I'm very excited to be a part of helping to empower more faculty and graduate students to evolve their work in ways that will help them find a larger platform to address bigger problems.

Northwestern Buffett’s Idea Incubation Process is focused on fostering a collaborative work environment that turns ideas into impactful, interdisciplinary research.  What do you think the value of this approach to research is, and what would you say to any faculty who may be interested in participating in it?

First, I would emphasize that I do value work within individual disciplines very much. Having a mastery over the methodology and central texts and theories of a single discipline is very important. But, as is often the case, our greatest strengths can also often prove to be our weaknesses. Being able to see some things very well may also mean we don't see our own blind spots. The Idea Incubation Process is designed to help people overcome those blind spots and create a space where faculty members can bring their own expertise to the table while simultaneously interacting with and learning from others. It's really grounded in supporting the kind of work that’s broader than what any single department would do on its own.

How has your own academic work benefited from working collaboratively across traditional silos of expertise, geography and/or culture?

My work is in epistemology, which is the study of knowledge and inquiry. It’s a field that tends to look at the possibility of knowledge, usually on an individual level where one person is amassing the kind of evidence that would allow him or her to know some particular claim.  It doesn't really speak to the kind of broad, creative and collaborative experience that people can have at an institute like Buffett, so watching people engaged in inquiry in this more open-ended way has been fascinating for me. It has really opened up new ways of thinking about my own work.

What do you like to do in your free time?

I like to go on hikes with my family and our dogs, and I also read a lot. That tends to keep me pretty busy!